Ben Carson is one of the most amazing humans ever to walk the earth. I first heard about him from a movie about him in 2009. So, when I had the chance to read a children’s book about Ben Carson to my kids, I was so excited! We read Ben Carson: A Chance at Life by Janet and Geoff Benge. And, it has been a wonderful experience for both them and for me. Why Did I Choose the Benge’s Book about Ben Carson?

Let me start at the beginning of why I picked this book about 20th-21st Century hero Ben Carson to read. After all, we usually read biographies and other non-fiction books that go along with the historical time period we are studying, and we’re studying Ancient Times this year!
I attended a blog conference for Christian homeschooling mom bloggers in October and met an unexpected hero there. Janet Benge is the co-author (with her husband Geoff) of the YWAM (Youth With a Mission) biography series Christian Heroes: Then & Now and Heroes of History. I have read many of these books through the years to my kids as part of our homeschooling, and I was so happy to meet Janet in person and tell her what an impact they have had on our lives!
She had several books there at the conference for sale, and when I saw the one on Ben Carson, I knew that should be the next one to read.

Which Books I Have Read

Every single one of these books is written with quality, excitement, and skill. The kids stay just as excited throughout the entire story as I do. Here are some of the titles by Janet & Geoff Benge I’ve already read in my homeschooling career:

A Little About Janet and Geoff Benge These two wonderful people, Janet and Geoff Benge, were unlikely authors. Janet has dyslexia, which wasn’t diagnosed as a child, so school was very difficult for her. And, Geoff did even more poorly in school. They became missionaries from their native New Zealand, and eventually, she started writing a newsletter about their experiences. That turned into the gig of writing missionary biographies for young people!  The first two they ever wrote are still some of the most popular: Gladys Aylward and George Muller. I’ve read both (I reread Gladys Aylward last year), and highly recommend them. 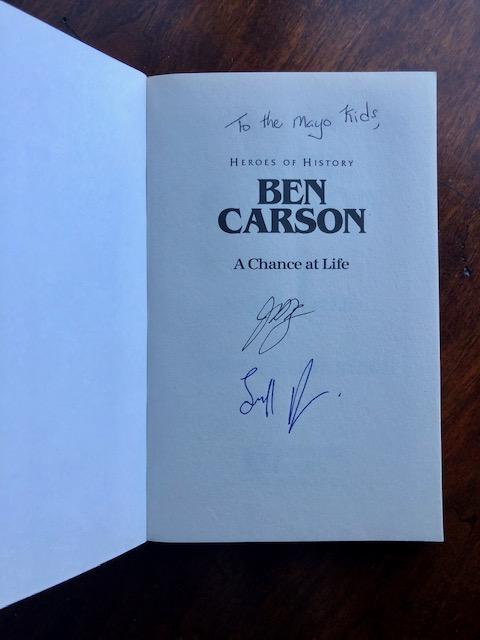 Their Inspirational Stories Make Me Cry

I’m not sure how they do it exactly, but every single day I read aloud (and it takes me a couple of weeks, usually, to get through the entire book), I cry. It’s just a joke with my kids now; they expect it.
These people are so amazing. Heroes like David Livingstone, Harriet Tubman, Nate Saint, Gladys Aylward, and Ben Carson.
The experiences they had: the strength, the miracles, and faith. I’m crying even now just thinking about them. These are the heroes we want our children to have. Book Review of Ben Carson: A Chance at Life

I started reading the book about three weeks ago and finished it today. I highly recommend it! It will inspire both you and your children!
The kids I read it aloud to were ages 7, 9, and 11. It kept all of them, and me, on the edge of our seats. We wanted to know how the children would do that Ben was operating on. We cried for those who died–and for those who survived. We marveled at Ben’s skill and how God directed him. We loved hearing about his dear mama and how if not for her, his success would probably not have happened. And, we loved reading about the honors Ben received.

Favorite Quotes from the children’s book about Ben Carson:

Here are some of my favorite quotes from the book:

“Every letter Ben received and read delighted him. He was more convinced than ever that reading was the key to getting out of poverty and into a meaningful career.”

“Ben’s fatigue was gone. He felt focused and energized as he separated the last blood vessel that joined the twin boys. At that moment the “Hallelujah Chorus” from Handel’s Messiah burst over the stereo system. Ben felt goose bumps rise on his arms. The Banda twins were now separated, and the surgical tables were pulled apart.”

“. . . almost every group of young people he spoke to asked him for his secret to how he had risen from poverty in a single-parent home to such a prominent position. Ben gave a lot of thought to how to answer the question and finally came up with an acrostic — THINK BIG. Each letter stood for something Ben knew was critical for his success.”

T = Talent — know the talents God has given us and develop them.
H = Hope — be positive and expect good things to happen to us.
I = Insight — learn about other people and how they have succeeded.
N = Nice — be nice to everyone all the time.
K = Knowledge — society values people who have knowledge. It is the key to having a good career and being of service to others.
B = Books — read every day, even if you have to start off with simple books.
I = In-depth Learning — try to understand the reasoning behind things. Why did certain events happen? Why do people do what they do? What else could we learn about a topic?
G = God — acknowledging God and seeking Him is the key to learning.

Giveaway of a Heroes Then & Now Book I love this awesome Giveaway!

The Benge’s will give away three sets of five books!

I am so grateful to Janet and Geoff who have touched thousands of lives through the stories told in their books, including this children’s book about Ben Carson! Be sure to read a Benge heroes book soon, and let me know in the comments which you chose!