Help! My Child No Longer Wants to be Homeschooled

That’s the topic assigned to me last week for my Facebook Live Tuesday Talk. I told the host that I actually had a lot to say on the subject because this has happened to me. In fact, we sent our oldest son (age 16) to public school for the first time just this year. 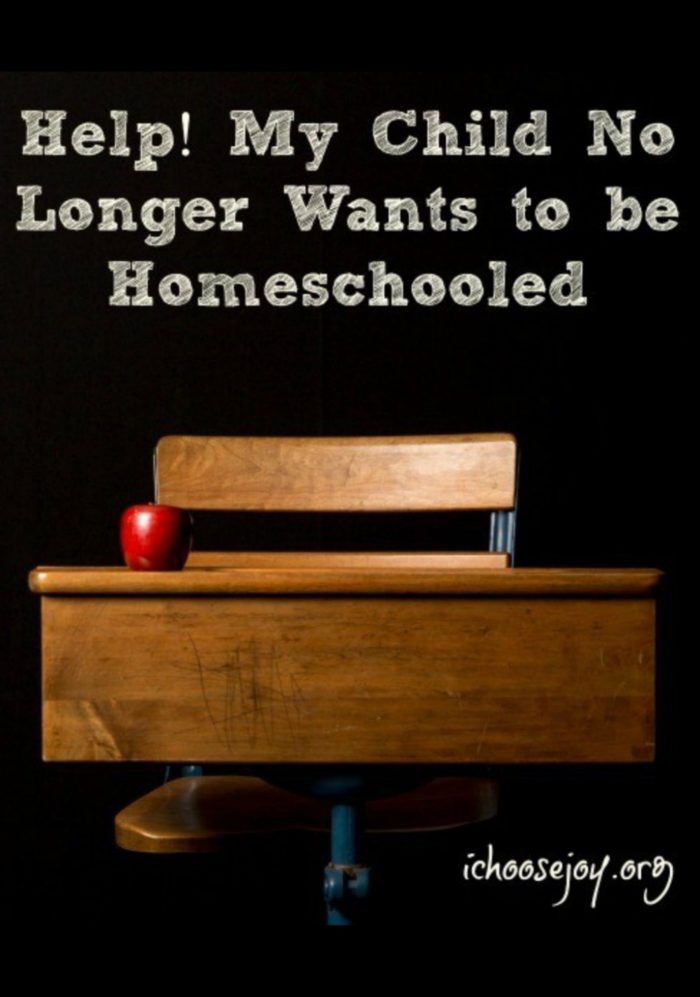 Let me back up a bit and tell you some of our story. My husband and I planned to homeschool even before I became pregnant with our first child. I had been a public school teacher for five years and knew a lot of the “behind the scenes” of the system and believed we could (and should) do better than that.

After I did become pregnant with our first, I checked out lots of books from the library (blogs and even the internet weren’t big yet) and started going to our local homeschool conference (Illinois Christian Home Educators) a year later. We learned as much as we could, and it was exciting. It wasn’t long before we were living the “homeschool lifestyle.” We could no longer imagine not being in it.

By the time my oldest son was 11, we had 8 kids. Homeschooling kept getting harder and more complicated with so many grades and subjects to teach, but we were still doing well.

However, my oldest kept asking to go to school.

The first thing we had to do was find out why he wanted to go to school. At first, I really believe it was because he wanted to feel more “normal.” Most people out there go to a traditional school, and he didn’t want to feel weird.

We continually talked about the wonderful benefits of homeschooling, and how they outweighed the feelings of weirdness.

He understood all of these, and we were successfully able to encourage him to stick with homeschooling for quite a while.

I told him, “Let’s wait and talk about it for middle school.” Then, I realized he was so susceptible to peer pressure that that would be a disaster. I let him make more decisions about what he wanted to study and he got involved in musical theater, which would have been much harder for him if he had been in school.

When he started asking again, I said, “Let’s wait and talk about it for high school.” When he was getting close to being finished with 8th grade, I showed him how he had already earned quite a lot of high school credits and he should keep homeschooling so he could graduate early.

He had nearly completed his freshman year of homeschool high school when he started begging to go to school the following year. His main reason was probably still a bit of the original reason (of not being a part of the norm), but now he was saying that he felt he wasn’t doing very well academically.

He was right. He was no longer thriving in our homeschool environment because of his own choices not to do his schoolwork to his fullest potential. One reason I think this might have been happening was because he is a boy and his mom was his teacher. This isn’t a problem for all boys, but seemed to be for him.

Now, let me skip ahead a bit and say that his younger brother, who is a freshman in homeschool high school this year, is thriving at home academically. He is using the exact same curriculum this year, and it’s working well for him.

So, my oldest son and I started researching the best options for him. Close enough to our house, we had the local public school, a very small Christian school (where he had participated in band from 5th-8th grade), and a large Catholic private school. After touring the Catholic school, we decided that although it was very nice and great academically, it was too expensive. The small Christian school didn’t offer enough choices for him to thrive academically. So, we decided to go with the public school.

So Far, So Good

I’m happy to say that he has done excellently at school this year, earning straight A’s his first semester, even in difficult classes such as Honors English and AP U.S. History. He also took Spanish 1 and Weights and Conditioning. (The school is on a block schedule which finishes an entire course in one semester, similar to college.)

Did We Make the Right Decision?

Only time will tell. I have had friends who warned us against it. They said that sending their kids to public school was the beginning of a slippery slope that led their kids away from God or from their family. We had to weigh the decision based on what we knew about our son. He simply would not thrive any longer being at home with us. We knew that, and we want the best for him. As his parents who love him, we prayed, and we talked to him. We knew he was mature and ready for the peer pressure he would face there.

Make Your Own Best Decision

I encourage you to think and pray very carefully about your own decision about whether to stop homeschooling a student. We did it for this son, but not our second son. I sincerely hope that I’ll be homeschooling all the rest of my kids through high school. But, I also know that we have to do what’s right for the child and not let our philosophy and beliefs about homeschooling make us legalistic about it.

It’s been two years since I first wrote this post. After the first year (his sophomore year) at our local public high school, we moved 10 minutes away to a new town. He had done well academically and socially at the first school, but his junior year was really tough. I think it was due mostly to the fact that he was entering a brand new high school as a junior. At that point, friendships and cliques are strongly settled, and it was really hard for him to find his place. Academically, he switched from a block schedule of only 4 classes at a time to a typical public high school schedule of 7-8 classes. That took some adjusting. He was also working a dishwashing job at a restaurant that kept him out late many nights.

By the end of his junior year, however, he had it figured out. And, his during his senior year he was doing great again. He’ll be graduating in May! I’m happy to be chaperoning his choir trip to Europe this spring break.

For the most part, I’ve been satisfied. I didn’t get involved much in the first school, but have done more in the second school. There have been disappointments–not getting on the baseball team and not getting the lead in the school musical that he worked so hard for. But, there have been some great experiences as well, such as this.

My second son took physics, woodworking, and graphic design at the public school last year, and decided NOT to go back for any other classes there this year. He is taking classes at the local community college instead. Both boys will graduate high school May, 2019.

My oldest daughter is a freshman in high school and wants to continue homeschooling. I’m glad. I love homeschooling, and strive to bring the best educational experiences possible to all my children. For my oldest son, that happened to be the public school for his last 3 years of high school.

Update now that he has graduated from high school

It was good for me to see what was happening in the public school system. Just like always, there are good teachers and bad teachers, good counselors and bad counselors, and good administrators and bad administrators. I’ve been happy and not happy with different aspects of the whole pubic high school experience. I feel confident that we made the right decision, though. He learned a lot both academically, but also socially in figuring out how to navigate challenging aspects of relationships of people he met. He learned about consequences for his actions that I hope will carry on with him as he goes to a public state university in the fall. He learned how to study, be an advocate for himself with his teachers, and be responsible for his own schooling.

I’m so glad it’s behind us, though, and have been enjoying unsubscribing from the public school email lists. Homeschooling is such a blessing for our family, and we’ll continue to do it for all the kids who thrive with it.